WCSA Game of The Week 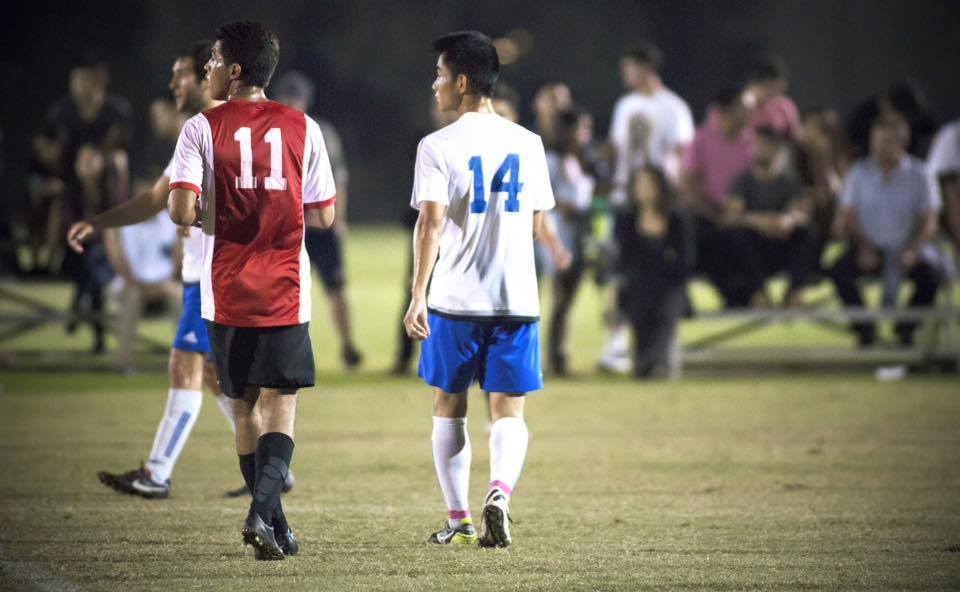 The West Coast Soccer Association is proud to announce the Game of the Week. SDSU and UCSD mens teams will be playing on Friday Oct 7th at UCSD. This game is getting some traction in the community. UCSD Social Media site has over 150 confirmed fans and SoccerNation did an article on this event last year, here is the the article link.

SDSU is coming a two win weekend with victories over Grand Canyon University and a 3-2 win over Arizona State University.  UCSD Men were last in action vs UCI B team. The UCSD Men’s club soccer team eased to a 2-0 victory in dominant fashion against a shorthanded UC Irvine team, continuing their undefeated start to the spring season (3-0).

Prior to the game, captain and coach Henry Cullen said, “I am very pleased with our start to the season...bringing the focus and discipline that we have in practice to our games is the biggest key for us.”  Also adding, “this spring season we expect to maintain our undefeated record from fall and win the league championship.”

From the get go, the Tritons looked the most threatening and it would be the theme for the entirety of the game.  In the 4th minute, Senior Kazu Otani (#14) played a wonderful through ball to Junior midfielder Quinn Frantzen (#23) and went on to poke the ball around the keeper but followed it with a heavy touch and the chance went begging.  Four minutes later, Sophomore Jonah Gooden (#12) found the back of the net after a series of penetrating balls to break the Anteater’s backline, and go one on one with the keeper.  Once again in the 13th minute, the Tritons found themselves in a one on one situation with the keeper, though this time Junior Firas Eid (#10) could not keep his composure and finish.  One minute later, Gooden would earn his brace after he slotted home the ball from 6 yards out.  Although being up 2-0 inside 15 minutes, the Tritons struggled to convert most of their chances during that time and ultimately throughout the game.  UCSD held a tremendous advantage in possession, UCI did not see any of the ball in the first half.  The Anteaters attempted a mere one shot in the first half and it came from a speculative 40 yards out.

In the second half, UCSD made a handful of substitutions, which disrupted the rhythm of their game.  As a result, UCI held a good share of possession during the half and earned their first shot on target in the 59th minute but that was all they could manage.  The Tritons attempted to generate opportunities like they did in the beginning of the game but could not do so until the 69th minute when, Sophomore Christian Gunther (#9) shot from just outside the 18-yard box and hit the post.  Even though still dominating the game, several UCSD players began to show signs of frustration.  Garen Arabian (#19) was issued a yellow card for kicking the ball after the whistle had already been blown and later Senior Mike Ranis (#7) received a booking as well for repeated fouls.

The game ended 2-0 in favor of the home team, UCSD and after the game, Cullen was pleased with the result but in terms of the second half, “Things lagged into the second half...We didn’t have the right urgency as we did in the first.”  “But it was a good game for me, I stepped out fairly early, watched few of our players who don’t play as often and tried out new combinations of players.”

Next, UCSD will play host to local rivals, San Diego State on February 20 at the UCSD Sports Deck.  Kickoff is set to begin at 7:00 p.m.

The UCSD Women will also play the SDSU Women team at 4:30pm at the UCSD Sports Deck.  This will SDSU first game of the Spring, where UCSD has several victories.  The UCSD Women’s club soccer team comfortably defeated the University of Redlands, 4-0, to open up the spring season.

According to captain and coach Amy Schwartz, “Our team is looking to build on our momentum from the end of Fall league and our victory in the SD Cup.” We've had a few months to recuperate and refocus, and my girls are very excited to be back out on the field.”

The first half saw UCSD take control and dominate possession, Redlands were far too slow in moving the ball around causing problems for themselves.   After creating a few half chances in the opening minutes of the match, UCSD junior defender Mallorie Nguyen headed the ball in from a corner in the 7th minute, making 1-0.  Only 2 minutes later in the 9th minute, standout junior midfielder Abby Chin gave UCSD a 2-0 lead after a wonderful strike from outside the 18-yard box hitting the crossbar and in, left Redlands goalkeeper with no chance.  Chin constantly threatened the opposition with quick, close dribbling and movement off the ball.  Then near the end of the half, in the 39th minute, Toni Hedding senior defender scored a tap in from 6 yards out to make it 3-0 in favor of the Tritons.  Redlands had no response to the dominance of the Tritons and did not threaten once in the first half.

UCSD continued to heavily dominate the match in the second half while Redlands struggled to truly hang on to possession for any amount of time.  The 57th minute, got their first solid chance of increasing their lead when Senior forward Olivia Hadidian was played through on goal but ultimately failed to make it count.  Again in the 70th minute, the Tritons created a chance through brilliant individual skill from Laurel Bowling, using a quick burst of pace to turn the corner on the defender and shooting across goal and hitting the crossbar.  UCSD was finally able to get a second half breakthrough in the 75th minute, through Junior midfielder Alaina Bujitor’s finely struck half volley from inside the box.  That gave the Tritons a 4-0 lead, adding the exclamation to the victory.

“Definitely pleased with the result, it was a good way to start the season...there is a lot of good creativity and good effort and we moved the ball really well,” said Schwartz in speaking after match.

The Tritons followed up this victory with a 4-0 win over Point Loma Nazarene University on February 6th at Warren Field.