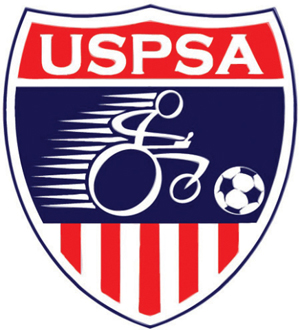 The West Coast Soccer Assocation was honored to attend the US Soccer AGM Breakout session on the Power Soccer.

Power Soccer combines the skill of the wheelchair user with the speed and power of the chair itself, to participate in an extremely challenging game similar to soccer. The game is played in a gymnasium on a regulation basketball court. Two teams of four power wheelchair users attack, defend, and spin-kick a 13-inch soccer ball in an attempt to score goals.

In July of 2017, eighty of the world's most elite power wheelchair athletes will converge in Florida to demonstrate their abilities and bring added attention to our exciting sport.

How You Can Help
As a 100% volunteer­ driven organization, we could use your help in making this event a possibility. Costs for the United States to host and attend the 2017 Cup on their home turf will run upwards of $700,000. To put it simply, our power soccer athletes could use some of your own generous power and support.

We are seeking donations of $20.17 to signify this once ­in ­a­ lifetime event. Your donation can be directed to a particular athlete of can go to the general fund. Your gift will help support the needs of Team USA as well as fulfill our obligations in hosting the World Cup. Team USA would like to thank you for taking the time to learn about our team. Your support will not only make this event possible, but open doorways for future players as well.